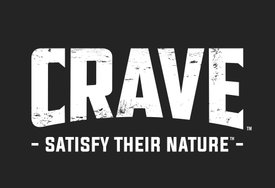 Born and raised in Moscow (Russia) where I later obtained a Law Degree, in 2002 I married my husband and moved to Serbia. At that time I was a successful breeder of Labradors and my kennel Blondess Empire can brag of many International and Multi Champions, as well as some top producers in the breed.

I got my very first dog when I was 6 years old - my parents gave me a sweet
Airedale terrier bitch puppy. Throughout my life, I have had a Pug, a Chihuahua,
and later Dobermanns together with my husband.

For over 20 years of my career as a judge, I have judged in the majority of European countries, as well as in different corners of the world, from Australia and South Africa to Canada and the US, as well as in Asia.

When I was born, my family already had a dog. It was a 6 months old German
Shepherd male imported from former Western Germany. Since that moment my life has been inseparable from dogs.

As a teenager, I started breeding German Shepherds but soon Dobermanns won my heart. I was lucky to breed (under the prefix of Devotion) and own many successful and some really outstanding dogs with numerous International Champions, Multi Champions, and a Vice-IDC Siegerin among them. Even though I stopped breeding about 20 years ago, Dobermann is still in my heart.

Over the years, Middle Asian Sheepdogs, a Belgian Shepherd, a Pharaoh Hound, a Pug, and even a mongrel have lived in my house. When I got married, my wife brought in a happy bunch of Labradors and for some time, we had been actively involved with this breed. However, during the past few years, I’ve decided to reduce both show and breeding activities to commit to judging duties.

I’m an electronic engineer and a professional journalist, being at different times a chief editor of Dog’s Life and Pet Planet magazines. I’m an International judge for all breeds, as well as a working trial judge for Agility, IPO, SchH, Obedience, and Hunting dogs. I have judged across all the continents and almost in every European country.

I have been involved with dog breeding since 1982 and my first breed
was rough collie.My first kennelname was Luck-Lustre. Official kennel
in FCI Calleca`ry since 1993.

I got judging rights in 1991. FCI judge rights 1995. I have been a
judge in many countries. Official BIS judge Breeder judge rough collies, dachshunds, whippets,french bulldogs and american cocker spaniels. 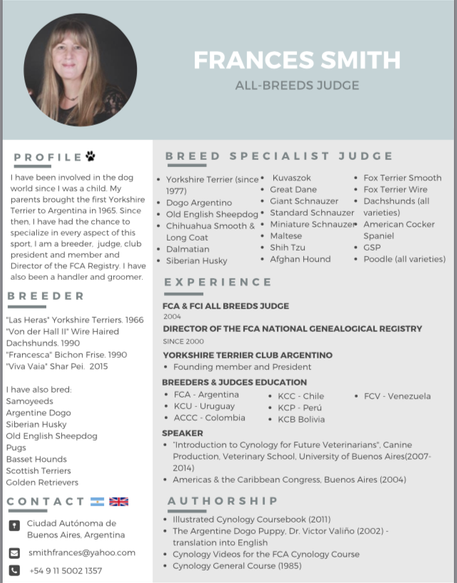 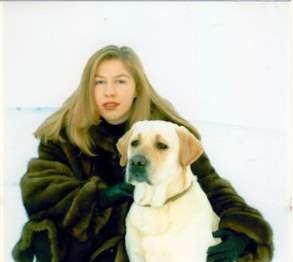 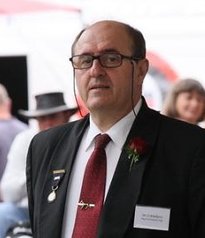 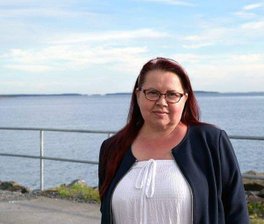 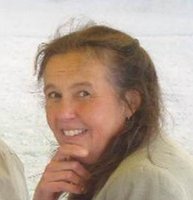 Paula Heikkinen-Lehkonen
I got my first dog, a Wire Fox Terrier, in the year 1961. I began to take part in club
activities, shows, obedience and hunting training from the beginning. My first dog was not a
star, so I purchased soon another, a bitch, who became Champion. My first litter of Wire
Fox Terriers was born in 1968, and since that I have bred over 300 litters, of Wire and
Smooth Fox Terriers, English Springer Spaniels and Longhaired Standard Dachshunds,
under Wolfheart prefix. I have never counted how many champions and group winners I
have owned or bred, (well over 200) but we have had over 50 International (FCI)
champions. I have exported dogs to about 20 different countries and many of them have
become champions in their new home countries. There has been also several hunting trial
and dual champions. One of our most successful dogs has been the Smooth Fox Terrier Int
Ch Wolfheart Nutcracker, who was Terrier of the Year in -76. Our successes include
winning the European Champion title in –98 with Int Ch Wolfheart Moritz and World
Champion title in 2001 with Ch Wolfheart Diamond Lil. Wolfheart Test Pilot was European
Junior Winner in 2019.

At the moment I have only Smooth and Wire Fox Terriers, about 20 dogs (and two
cats, but they are not for showing or breeding). Showing and breeding nowadays is
limited because of many judging appointments.

I was a professional groomer for about 20 years, doing all breeds, and at that time I
also handled different breeds in shows, like German Shepherds, Beagles, Cockers,
American Cockers, Poodles etc.

I have been  also Terrier &amp; Dachshund underground hunting trial judge for 30 years,
but decided to give that up because lack of time. We used to keep foxes and train
dogs for hunting trials, but nowadays there is no time for that.
I have been a board member of the regional Kennel Club for over 40 years, being
earlier the Vice-President years and for the last 20 years and at present the President.
I was a board member of the Terrier Club of Finland for 15 years, being the
President for seven years, and editor of the bulletin for 11 years. I have been a board
member of the local Dachshund Club for about 15 years, and member of the
breeding committee of the Springer Spaniel Club and the Spaniel Club of Finland. I
have been the secretary of the Lahti International Show (nowadays regularly over
4000 dogs) for 45 years, and last twenty years the President of the organising
committee. At the moment I am the Honorary President of the Finnish Dog Show
Judges&#39; Society after having been the President for about 16 years. I was the
President of the Fox Terrier Club of Finland for ten years, and again after some
years’ retirement. I was several years also a board member of the World Dog Press
Association. I am in charge of new judges’ education and exams for several breed
clubs, and have held seminars in several other coutries. 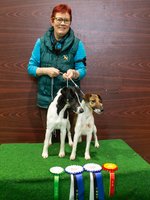 Rade Dakic was involved with dogs since his childhood. He was a owner of a various dog breeds as are German Shepherd, Sarplaninatz, Owzarek Podhalanski, etc, etc... His serious dog work starts with terriers and to this group of dogs he dedicated the most of his kinological work. He has owned Airedales, German Hunting Terrier, Westie, Bullterriers, Staffordshire Bullterrier, but his biggest love are American Staffordshire Terriers. Rade was one of the first breeders of Amstaffs in Europe and got his first Amstaff in 1986. In his Franstal's kennel he has produced about 30 national, International, American, Canadian, Thailand, Mexican and club champions on four continents. Rade Dakic wrote over 20 books about dogs which had a lot of editions. He was also correspondent of various dog magazines. He is member of WDPA (World Dog Press Association ). He has judged at the most prestigious shows in Europe, from Russia to Portugal , at National Specialties, Bundessieger shows, National Elevage, Punto Obligatorio, INTERRA, European Dog show, etc, etc.

I am a licensed International FCI -Association Club Canino Colombianno All Breeds Judge.

Born in Barranquilla, Colombia, Urologist by profession. I have been involved in dog showing from an early age, but my passion for French Bulldogs began when I had got me first one
in 2003.

I was one of the earlier  French Bulldogs breeders  in Colombia. I was able to win Championship
titles under the suffix Dazsan Du Upari, and since beginning my breeding program I have endeavored to own and breed high quality, healthy specimens that compete in Colombia and in other countries across the Americas.I have also involved with NorwichTerriers and Bull Terriers and my nearest friends to English Springer Spaniel, Belgian Sheperds and  Yorkshire Terriers, having the opportunity to know deeply those breeds too.

For many years I have been heavily involved in the education of physicians in my specialty area through several undergraduate and postgraduate programs in Colombia. I have extended this
commitment to the canine fancy. As a member of the Colombian Kennel Club
Association, I participate actively in all educational events and in the
process of training new judges, which I have carried out under the guidance of
the Association.

I also have been a Board Member of the Bogota Kennel Club and I am currently President of the Club, which is an entity associated to the ACCC.

I have also participated in the FCI Section America and the Caribbean, and been a Colombian Kennel Club delegate to the FCI General Assembly in Paris.

I have judged widely, visiting many countries of varying cultures and cynologies, French bulldog specialties, through North and South America, Africa, Asia, Europe and not so far in  New Zealand and Australia where I was the Best Exhibit in Show Judge at the prestigious  Royal Melbourne Dog Show 2017, including some excellent appointments with great judges and outstanding dogs  in General and Specialties Shows as well, Asian and Pacific Section Show 2018 in Kuala Lumpur and Brussels Winner 2018 in Belgium. Before pandemic I judged The National Show in Indonesia, Taiwan and  Athens International Show CACIB 2019 as well as Assitant to the II FCI World Congress for Judges in Acapulco.

For 2020 I judged in a very special Show granted for Mexican Cinological Federation FCM, wich included only Colombian Judges as guests.

This year I will be judging  The Americas & Caribbean FCI Section Show in Costa Rica.

For me is always a great challenge to judge a new show and meet new wonderful dogs and old and new friends. 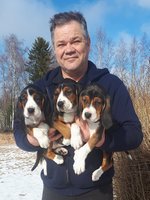 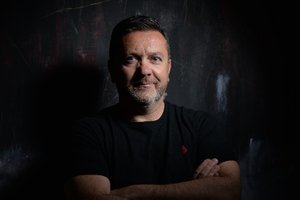 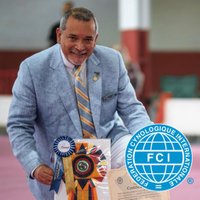 In 1978 I bought my first Golden Retriever. Since I met the race I have been fascinated and I was increasingly my committing with the breed. I began to study, temperament, structure, blood lines, crosses and breeding with the purpose of collaborating in its development in my country.

In 1993 I decided to take the big responsibility of breeding. From that moment I have been leading the

improvement of the breed, in Colombia, and have also participated in its development in many countries,

including the United States, Argentina, Ecuador, Peru, Mexico, Brazil, Guatemala, Venezuela and many more. My bloodline is based and combined with the best and most famous American top blood lines.

We have come to have such high quality dogs that we can compete with the best Golden that can be seen in the dog shows in the United States, Canada, Central America and South America.

With the support of my daughters Laura and Cristina, I have raised two or three litters per year, by myself or co-owned. From these litters, many dogs have got their championship title, others are just close to complete it, and my dogs are appearing for years like the best dogs in my country.

Some have excelled not only in Colombia, also in other countries as Argentina, Peru, Brazil, Ecuador, Uruguay, Puerto Rico, Costa Rica, Mexico, Guatemala and Venezuela, winning several championship titles, winning world championships and even several times Best of Breed in the United States.

My golden Ag_Golden Intican Diamond Age (SIMBA) was the Golden number one in the United States in 2006, winning 21 times first group and 5 BIS a year.

I have been part of the Technical Committee of the Club Canino Colombiano Association and I am a member of the Board of the Colombian Association of Labrador Retriever & All Pure Breeds.

I got my license to judge Golden Retriever in 2002.

Since January 2004 we have been supporting Dr. Clara Orozco, in his thesis on psychiatric assisted therapy dogs for people with severe depression, Montserrat in Bogota Clinic, obtaining excellent results.

Since the year 2007 I have Dachshund mini wire a new challenge, achieve raise in the height of Bogota. They come from magnificent blood lines from Italy, Spain, Russia, United States and Argentina.

In 2009, I got the international all bred judge license. 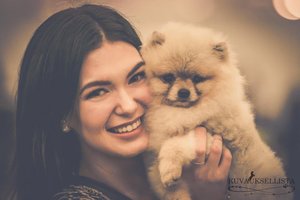